Food as a Gift, With A Cherry On Top

By Amy SchallerJanuary 9, 2014No Comments

Home » Chasing Freedom » Food as a Gift, With A Cherry On Top 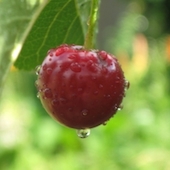 In my house, I am known as the “Queen Of Sack Lunches”. My husband recently texted me, “…you make the most nutritious meals on the planet. I don’t know who has the responsibility for overseeing healthy meals–the Surgeon General or the Nutrition General, but you would be at the top of their list.” This was a huge compliment to this former disordered eater!

My dad left when I was young; we were never a family. My mom had to work to support us and left 4 kids, from 8-13 years old, to fend for ourselves. It became easy for me to skip meals, or come home and open a can of chili and that was my dinner. Although I made occasional meals after I married, and begrudgingly made sack lunches through the years, I avoided making meals; I dreaded the refrigerator and the pantry, both held food which meant guilt, shame, and defeat.

It wasn’t until about 2 years ago that I began making lunches for both my husband and son without being asked. Why did this change happen? I began to look at my job as wife & mom in a different way and saw myself as Jesus’ servant to them and for them; my job was to make them healthy & nutritious meals, even if it was only one meal a day, and that became one of the first steps in my recovery, seeing food as my gift to them.

And what began as one meal, has become 2. Currently, I wake up to the alarm at 5:30am. This is not out of necessity, but by choice.

In October, when my son started a strenuous 6-month training program for a highly demanding job, with no time to cook on his own, I decided to start him off well. Day one, I got up and made him breakfast. He was so appreciative, it led to day 2, then day 3, then… Two months later, I am still doing it, and my plan is to continue until he graduates in 4 months. I want him to eat at least one healthy meal a day. At his job, sometimes he doesn’t even have time to eat his sack lunch.

So I’ve been getting up at 5:30am, five days a week, to support and encourage my son, to start his day with a healthy hot breakfast, to set him up for success. And when I set out the fruit, whether it’s a sliced banana, a fruit salad, or a bowl of orange wedges, I add a cherry on top, for that extra touch of momma-love. That extra touch that I never got growing up. That extra touch that he wouldn’t do himself because it might seem too silly. Maybe someday maraschino cherries will remind him of his momma’s love, because a mom’s love IS the cherry on top.

“For what we preach is not ourselves, but Jesus Christ as Lord, and ourselves as your servants for Jesus’ sake.” – 2 Cor. 4:5 NIV

Why We Overeat, Constance Rhodes