From Where I Sit

The Truth About Garbage

Home » From Where I Sit » The Truth About Garbage 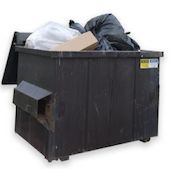 “Our trash is our testament; what we throw away says much about our values, habits, and lives.”
SAGE’s Encyclopedia of Consumption and Waste.

On the website of Drew University’s Department of Sociology is this tidbit – “Garbage is the other side of culture. Our garbage and our waste can be considered a mirror in which our actions and our values are reflected back to us.”

I don’t know about you, but I’m not going to sign up to pick through someone’s garbage can and record everything I find – or would I? It recently occurred to me that sometimes in my work as a therapist, this is exactly what I do. I help people discover the truth about garbage.

Meredith came to see me in a broken condition. Her heart was broken, her marriage was broken and her spirit was broken. Her husband had pitched her into his garbage dumpster, that is, he threw her away, walking out on her and their children. Meredith sat across from me, peppering me with questions:

What did I do?
How could he do this to me?
What is wrong with me?
What am I going to do?
Will anyone ever want to have me again?
Will I be alone the rest of my life?
How will I survive?

Since many of her questions were related to exploration, I decided to approach her as someone else’s garbage. I asked her to think about what it said about her soon to be ex-husband that he discarded her. What could we learn about his values and habits by using her as a mirror?

You see, Meredith had made the common mistake of feeling like she actually was how she was being treated. “If I’ve been thrown into the garbage, then I must be garbage.” But, the truth is that the way people treat us says more about them than it does about us.

Bouncing my reframe of her situation back and forth between us, Meredith came up with an interesting list of her “ex’s” traits. When she looked at her own positive traits, traits that he had “thrown away,” this is what she suddenly saw:

He doesn’t value devotion.
Having a wife who is committed to being a good mother is not important to him.
He has a distorted view of what loyalty looks like.
Compassion and sensitivity toward others have little value.
He dislikes gentleness.
A passionate heart means nothing to him.

At some point, we’ve all felt rejected, cast off like so much rubbish. But often, the problem is with the other person’s priorities. Our innate value lies in the fact that we are God’s precious creation. Instead of looking inward, we need to look to Christ for our identity and allow the other person to be responsible for their actions.

Don’t Judge a Book by it’s Cover, by Gina Paris

Stop Focusing on Self, video