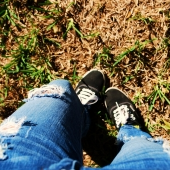 It finally happened. My six-year-old uttered the s-word.

No, not that s-word, the four-letter one that rhymes with “spit.” And not that one, either, the three-letter one that makes parents sweat to explain romance and reproduction. The s-word that escaped my daughter’s lips was a six-letter one:

The whole quote was: “I need to wear SKINNY jeans because they’re better.”

It was going to come sooner or later, given our cultural obsession with thinness. But I also didn’t want to read too much into it. So what followed was a conversation about how skinny jeans were or were not actually better, and who told her that they were. Afterward, it actually wasn’t clear to my wife and me that our daughter meant anything more than skinny jeans are more comfortable to wear. So for now, we’re just keeping it in mind, telling her what we’ve always told her – she is beautiful and doesn’t need any particular clothes to make it so. But we’re on the alert for future signs that she believes being skinny is superior to being anything else.

I believe the fashion and media industry elites bear a huge share of blame for body image issues. They assault the average woman with 400 to 600 ads daily; nearly all the visual ones are Photoshopped. That’s an incredible amount of pollution emitted into the cultural atmosphere! And kids see many of those ads, too. So it shouldn’t surprise us that, according to MissRepresentation.org, 42% of first through third grade girls already want to be thinner, while 81% of ten-year-olds already express a fear of getting fat. About the same percentage of 10-year-olds have actually tried dieting, and nearly one out of every three teenage girls says she has starved herself to lose weight.

How can we help kids navigate such a culture? I certainly need to grow at this, but some things my wife and I currently try to do are:

Nurture emotionally safe and attached relationships in our family. We try to show in words and actions – including hugs, kisses, and listening ears – that we love them unconditionally, and that Jesus does, too.

Control our daughters’ media exposure and discuss it with them. We limit their TV and computer game time, as well as the particular programs they can access. Mostly, they just watch stuff we’ve recorded, and we frequently discuss the values on display.

Praise innate beauty and not just dressed-up beauty. When we do praise their appearance, we try to frame our compliments carefully. We don’t want them to think their outward beauty depends on outward adornment. For instance, if one of them is wearing a nice dress, we often say, “my, you look fancy” instead of “wow, you look pretty.” To begin with, we already tell them often that they’re pretty, regardless of what they’re wearing..

I hope and pray that one day, when my daughters are all grown up, that I’ll hear them say a different S-word about their appearance: SATISFIED.

She Watches Me (Kellie Avery)

The Art of Being (Book, Constance Rhodes)