By Ashli RousselOctober 17, 2013No Comments 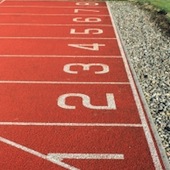 The day I saw an eating disorder specialist for the first time, I received two pieces of news. First, I was diagnosed with an eating disorder. Second, I was not allowed to run track until I recovered. Sadly, the second piece of news bothered me much more than the first.

Running track was not just something that I did, it was who I was – my very identity and obsession. Taking it away was like pulling the rug from underneath my feet. At first, I denied my eating disorder diagnosis, thinking that my diet and exercise habits were perfectly normal and healthy. I attempted to fix things on my own by trying to gain weight and jump back into track before the season ended, but I was unsuccessful because I really did have an eating disorder. My thoughts and behaviors soon spiraled out of my control.

At this low point in my battle, God gave me a verse from Scripture that spoke directly and sweetly to my broken heart. Just when I was asking the Lord why I could no longer run, He revealed truth to me from Psalm 119:32, which says, “I run in the path of your commandments, for you have set my heart free.”

It was as if God was saying, “Your days of running are not over. They are only beginning.” Through my eating disorder, God showed me what it means to run in the path of His commands. I learned to take all the energy and passion that I previously put into track and channel it into my relationship with Christ. Instead of track, Christ became my everything – my identity and obsession.

From that moment on, I approached my eating disorder with a renewed attitude because I could see that God was present in the midst of it all. He had not abandoned me, but was actually speaking to me, teaching me, and gently guiding me.

God is present and powerful in the middle of our battles. He does not abandon us when we begin to struggle, and He is not patiently waiting for us on the other side when we finally get it all together. He is here, right in the middle of what we face and fight every day. He doesn’t stand at the beginning or end of the battle; He stands beside us through the whole thing.

In 2 Kings 6, when Israel faced a significant battle, Elisha’s servant woke up one morning to see the vast army approaching. When he became instantly distressed and wondered what to do, Elisha prayed, “Lord, open his eyes that he may see.” Suddenly, the servant saw the mountains full of chariots and horses of fire. An angel army was fighting for Israel, and they won the battle against all odds.

As I wake up each morning and face the battles before me, I am learning to look beyond the vast army and see something more – the surrounding presence of God. I pray for God to open my eyes so that I can see His powerful presence in the midst of my struggles. Even as I go through troubles, He guides me faithfully, holds me tenderly, and speaks truthfully from His Word. God is fighting for me, and I am surrounded by His strength, salvation, and restoration.

Running and the Pursuit of Excellence, by Krissy Close

Cut Back on Exercise with EDNOS? panel response