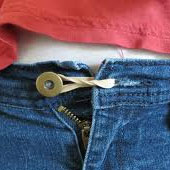 Now that I am reaching my 15th week of pregnancy, it seems that everything is changing. Nothing fits right at all, and I’m fearfully counting down the days to where all of these tricks I’ve been using to fit into my clothes stop working altogether. I feel as if my body is changing every day!

Meanwhile, my brain resembles a circus act, and my head aches at least once or twice a week. Thankfully, the nausea is dwindling down, but I’ve been having some trouble finding comfortable sleeping positions during the night. Pregnancy has its issues, but I’m constantly reassured by mothers all around that after the baby is here, I’ll realize that it will have all been worth it 10 times over.

My biggest struggles, however, have been mental – it’s anxiety over pregnancy weight gain. I am eating daily amounts of calories that used to resemble binges from my past. Because I run, I eat more than the average person to begin with, but now I’m eating every one or two hours, and I have to admit, it’s a little daunting; my stomach growls every hour!

I’m not weighing myself, and I’m not writing down what I eat in a journal, but sometimes late at night on instinct, I’ll tally up my calories for the day in my head. I don’t do this every night, but when I do, it usually depresses me. Why do we do this to ourselves? I know I’m not the only one.

Even though I made a promise that I wouldn’t weigh myself or keep track of what I eat, I’m still finding those mechanisms that allow me to keep a watch on myself…even if it’s in a subtle, sneaky way. I don’t want to let the baby down by breaking my own rules–rules that have, so far, kept me from losing sight of what matters the most.

Maybe it’s the fear of my doctor telling me that I need to slow down and watch what I’m eating. Telling a woman who has had eating and weight issues that she is gaining too much weight is like throwing a match on a puddle of gasoline.

Or maybe it’s the way I’ll appear to my husband. I don’t want him to worry about the way I’ll look after it’s all over and done with.

And maybe it’s my fear of people looking at me like they looked at certain celebrities during their pregnancies. Take Jessica Simpson for example. I’m still in awe at how people criticized her during her pregnancy.

Maybe it’s just a little bit of everything.

It’s obvious that anxiety over pregnancy weight gain is allowing self-loathing to slowly creep back into my life, and it’s imperative that I find a way to ease it out just as quickly as it eased itself in. Thankfully, God knows we have worries and anxieties. We wouldn’t need Him if we didn’t. But in order to be set free from what binds us, we have to give ourselves up to him and believe that through our faith, we will receive the comfort and peace He so greatly promises us.

Psalm 55:22 states: “Cast thy burden upon the Lord, and he shall sustain thee: he shall never suffer the righteous to be moved.”

What comfort we can receive from such a poignant verse! It doesn’t matter how great or small our worries and fears are.

He will keep us covered in His shield of protection as long as we have faith to believe it’s there!

Is it safe to get pregnant while recovering from anorexia?