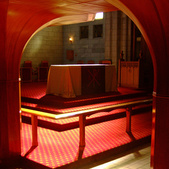 Some days it’s hard to remember that I bid anorexia goodbye. In those moments, I desperately need an altar to cling to.

In the Old Testament, altars were monuments, often erected as memorials to a theophany, or “God sighting.” In May 2000, the song “We Fall Down,” by Chris Tomlin, became my musical altar.

That month I had fought my college pastor tooth and nail. “I don’t have time to go to this Passion ‘One Day’ conference in Tennessee. I need to work, I need to study,” I told him.

I couldn’t admit that I was terrified of the bus ride, fast food restaurants and camping. And where was I going to do my morning workout?

Curiously, three days later, I found myself on a bus with 12 other hyper college students, driving from Oklahoma to Tennessee for the event.

I was in a bad place physically. Following two rounds of inpatient therapy, I had relapsed again, back to shaving calories, adding miles and skipping meals. I had no idea how I was going to survive this trip. However, I was long past denial of my eating disorder. Truthfully, I was scared of how far this dance with anorexia would take me. How long could I live like this?

Of that trip, I remember nothing, except for one song, the one night we camped at Shelby Farms, and one mysterious woman.

On this particular night, the organizers of the conference had arranged to call Botswana, Africa, to share our worship with them. As we began to sing “We Fall Down,” Christians on the other side of the world joined our chorus in their own language.

When people ask me today about my recovery from anorexia, the story is long. But there was that one night when I would declare: “God broke it.” That night, I found myself separated from my youth group, face down on the grass near a fallen tree, my heart wrenched with sorrow, exhaustion and hopelessness.

I have no idea what she looks like, and I can’t remember her voice, but a woman came up behind me and wrapped her arms around me. I poured my despair into her shoulder.

When we got home, I didn’t look any different, but I know that my supernatural God had broken the chains on my heart. That one night I began a steady climb out of the mire of self-starvation, loneliness, and hopelessness.

A couple days ago, my husband uncovered a bunch of CD’s that had been lost in our last move; choosing one, I popped it into the player. Tracks melted into the air, slipping past my consciousness until track 10. In the live recording, Chris Tomlin announced, “We are going to call Botswana, Africa, and you’re going to hear them singing “We Fall Down” with us, in their own language.”

Hearing that song, my anxiety broke again. My eternal, Heavenly Father played the melody that recalled for me the day He broke my chains.

Chris Tomlin shares the story behind “We Fall Down” (video)