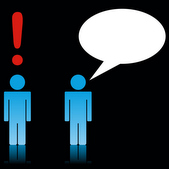 Those of us who have struggled with eating disorders are no strangers to voices. You know the ones: mostly internal, discouraging, designed to keep us down and suffering. But I’ve learned that pregnancy brings on a bunch of other voices, ones from the outside, and although they’re mostly words of congratulations and good wishes, there are also plenty of discouraging and negative ones as well.

On my pregnant body:

“You’re so little! I hope the baby’s healthy in there!”
“You’re so big! You look like you’re going to have that baby any second!”

And then come the horror stories:
“Let me tell you what happened to my sister’s niece’s best friend when she tried to have her baby! Let’s just say there weren’t big enough forceps in the world!”

Right off the bat I think: “They’re right. I have no idea what I’m doing; I’ve never done this before! I can’t do it – who knows what kind of mother I’d be?”

But then I give it a minute and realize how ridiculous those voices are, even the most well-meaning ones. Sure, knowing I’ll be giving birth in the next few weeks is really scary, but I can be brave!
And that means I can do the best I can, and stand up against all the voices who say differently than what I think. I feel that way already when it comes to pregnancy: sure, it’s uncomfortable, but it’s extremely doable. And it’s so joyful.

The Bible mentions a lot about how we should conduct our speech, because it does make a difference. Ephesians 4:29: “Let no corrupt speech proceed out of your mouth, but such as is good for building up as the need may be, that it may give grace to those who hear.” Colossians 4:6: “Let your speech always be with grace.”

That grace will help so many who are struggling, pregnant or not. And let’s try to give that same grace to ourselves when we think about our own bodies, our own lives!