You’re Not “Too Much” For Jesus

Home » Chasing Freedom » You’re Not “Too Much” For Jesus 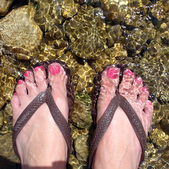 Ever since I was a little girl I have been given the message in one way or another that I’m “too much.” Every report card said, “Michelle talks too much.” And I promise you that I really wasn’t trying to be a trouble maker but my mouth just seemed to have a will of its own!

Fast forward to my late 20’s when I dated a guy for a couple of years who thrived on letting me know that I was too much. In his view I was too fat, too loud, too-this, and too-that. But then he would turn around and be nice and draw me in. Hence, the couple of years caught in the crazy cycle.

Not surprisingly, it was during and after that time that my eating disorder was the most intense. ED (my eating disorder) and this guy seemed to hand off to each other. They both knew how to belittle me and make me believe that I wasn’t okay the way I was. I was so accustomed to the constant criticism in my head from Ed that when this guy did the same thing I didn’t fight back because he was simply an external representation of what I heard on the inside.

But that was then and this is now. I’m not there anymore, thank God!

Just yesterday I was reading in John 13 about Peter. Good old “too much” Peter. Jesus was washing his disciples feet and Peter was not okay with it. He thought it should be the other way around, with the disciples washing Jesus’ feet. But then Jesus says to him, “Unless I wash you, you have no part with me.”

Now here’s my favorite part… Peter, in a way that totally reminds me of something I would say, proves how passionate he is about wanting to be a part of what Jesus was up to and boldly asserts, “Then, Lord, not just my feet but my hands and my head as well!”

The awesome part is that Jesus never puts Peter down for his “too much” response. Instead, Peter is accepted for being wired how he’s wired.

I can’t help but reflect on another foot-washing time when a woman came to Jesus with her bottle of perfume and then kissed and anointed his feet with her tears. Though criticized by others, Jesus defended her and said, “She’s been forgiven much and she loves much” (Luke 7:47).

This woman was another “too much” girl like me. It was her passionate response to Jesus that was directly proportionate to her gratitude and love for Him. I can relate to this. I too am deeply grateful and emotionally connected to the One who saved me from death and gave me life. Sometimes my response may seem like it’s too much but I can tell you that it’s real.

If you are a “too much” girl like me, let’s celebrate today being who God made us to be, coupled with a willingness to let Him temper us in His way and time, bathed in His unconditional love.

It’s a beautiful thing to embrace Jesus’ too much love for us because it’s that love that heals and breathes life into the core of our being.

Now that’s the kind of too-muchness that I’m ready for! Are you with me?!