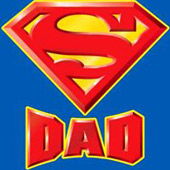 They are the highest commendations I have ever received, and most likely, the highest  I ever will; on my refrigerator door, gleaming in scribbly green and orange marker, proudly announcing my daughter’s affection, the star- and ribbon-shaped paper cutouts declare: “World’s Best Dad” and “#1 Dad.”

Looking back, I haven’t been “#1” in very many things, much less the “World’s Best” at anything. I was often the last boy picked (or next-to-last) when choosing teams for pickup ball. In high school, I distinguished myself so incredibly well that at my ten-year reunion, at least two people mistook me for our class valedictorian.

And although I have attempted to live a self-sacrificing, “I Will Be Here” kind of love for my wife for the 3942 days of our marriage (which is nearly 95,000 hours, or 5.7 million minutes), my wife would still rather hear Steven Curtis Chapman sing that song than me.

Now there are times when I’m confident I’m a good dad – maybe not the world’s best, but pretty good. But just hours later on those same days, I can also feel like a blundering, tentative rookie of a parent.

When my adorable daughters morph into bossy and screaming little drill sergeants, when their sweet voices turn into whiny howls, when their gentle handholding gives way to grabbing and pushing, and I explode, I don’t feel qualified to even be a “#100 Dad,” much less a “#1 Dad.”

That’s when the Thirty Percent Rule comes into play.

Maybe there’s a technical term for it, but in my home, it’s called the Thirty Percent Rule. It comes from a Biola University lecture, when a professor said that if parents are well-attuned, empathetic, and appropriately responsive to their children’s emotions even thirty percent of the time, then the kids will have a good shot at developing a healthy internal world.
What a relief!

When my wife reminds me of the Thirty Percent Rule, I’m able to give myself more grace as a parent. I then remember that Abba in Heaven just asks me to try my best, entrusting my daughters’ internal well-being to His care. Further, I’m less stressed about trying to be a perfect dad, and I can be calmer and more emotionally available for my girls. It’s good for them, and it’s good for me.

For me, this involves an ongoing, active engagement with my personal baggage, in community with others who are doing the same. If I can accept that I’m a broken dude and grow at forgiving myself for my shortcomings, my girls will be better able to do that, too. And maybe when they’re old enough to understand the Thirty Percent Rule, they’ll give me a little star or ribbon that says “A 30% Dad.” It will be high praise indeed.