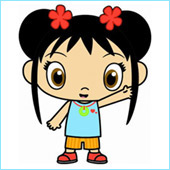 A koala who loves pandas. A pink rhino who flies using a balloon tied to her horn. A monkey who spins his own turntables when he DJs. And one emotionally aware little Asian girl. What kind of a motley crew is this? It’s Ni Hao, Kai-Lan!

If you’ve seen this still-running cartoon series on Nick Jr., you may recognize these characters. If you haven’t, then imagine Dora the Explorer as a Chinese girl, teaching Mandarin Chinese instead of Spanish. (That’s oversimplifying things, but it’ll do for now.)

As a Chinese American, I think it’s cool that there’s a cartoon teaching youngsters Chinese language and culture. But the series is even more valuable as a tool for parents to talk with young children about feelings.

It starts with Kai-Lan, a wellspring of encouragement, hugs, and love for the other characters on the show and even for viewers at home. (She signs off every episode telling us, “You make my heart feel super happy!”) The show’s greatest value comes when she talks through the process of identifying her friends’ feelings, including unpleasant ones like sadness, anger, and feeling left out. Kai-Lan, her friends, and her grandpa then model for viewers healthy interactions about emotions and how to handle them.

Ironically, I haven’t met many Asians reared in an emotionally nurturing family. Many of us from Asian backgrounds grew up in homes where feelings were not usually handled in healthy ways. It’s not just an Asian thing, of course. For my non-Asian friends who struggle deeply with self-defeating habits, their families were quite similar. We were rarely asked by parents how we felt about stuff happening in our lives, especially if those experiences were painful. In fact, we learned that it was especially unsafe for us to express our feelings, even politely, if they reflected disagreement with our parents. Our parents commonly responded by invalidating our emotions (e.g., “you shouldn’t feel that way”), or by shaming us subtly (“you show that I’m a failure as a parent”) or overtly (“you ungrateful child”).

It wasn’t okay to feel how we felt, so many of us learned to stuff our feelings and hide who we really are behind who others wanted us to be. We then developed depression or other emotional difficulties, sometimes clinically diagnosed, as we got older. To cope, we learned to numb our pain through self-destructive disorders and addictions.

It’s well-established that emotionally healthy kids will be more likely to avoid such self-defeating practices later on. We can foster that health by teaching our children that it’s okay to have any of their feelings, and by helping them learn how to express and handle their emotions productively, instead of just stuffing them.

So watch Ni Hao, Kai-Lan (also on iTunes) with your kids. Discuss how Kai-Lan identified her friends’ feelings and helped them handle it. Compare it to something that happens in your children’s lives. Then check out these.

And if your kids learn Chinese along the way, then tai hao le!