I hereby resolve not to raise Bratz…

Home » Positive Parenting » I hereby resolve not to raise Bratz… 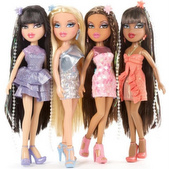 Last weekend, my five-year-old daughter attended a kindergarten classmate’s birthday party. Her friend received the cute bow-and-ribbon hair accessories and Hello Kitty paraphernalia that you’d expect for her age, but she also came away with two dolls from the notorious Bratz collection. Now, I had heard that Bratz dolls were popular with young girls, but to have them make an appearance at this particular party brought the controversy close to home.

If you’re not familiar with the hullabaloo over Bratz dolls and their associated videos and other spinoffs, I’ve included a couple of visuals to serve as a helpful introduction. It’s easy to see that these are not the kind of dolls that kindergarteners, or even elementary school kids, have traditionally played with. Bratz characters routinely wear heavy makeup, short skirts or shorts, high heels, and tops that bare the midriff. Their faces are drawn with dreamy, sensual eyes and with lips that appear to have received one-too-many injections of collagen.

Of course, Bratz wouldn’t raise many eyebrows if they weren’t popular. Although sales have fallen in recent years amid legal wrangling over their intellectual property rights, more than 125 million Bratz dolls have been sold since their introduction in 2001. When sales were at their peak, Bratz garnered a 40% share of the fashion doll market, second only to Barbie. Some of the controversy lies in the fact that millions of parents have said Bratz are OK for their kids.

But as for me and my house, two things speak louder. First, most professional psychologists and therapists who opine in the media have flagged Bratz as likely to impact young girls in an emotionally unhealthy way. In 2007, the American Psychological Association specifically named Bratz as an example of dolls that contribute to girls’ early sexualization. A year before that, developmental psychologists in Great Britain warned that Bratz dolls would negatively impact girls’ body image and self-esteem. If the greater part of the psychological community is correct, then Bratz at least contributes to the development of body image issues, eating disorders, and sexual issues for many girls.

Now, I’m no alarmist, saying, “If my daughters play with Bratz even once, they’re going to be saddled with all kinds of problems!” But that brings me to the second factor that sways me against Bratz – parental common sense. Call it a feeling, a kind of Spidey-sense, or even Spirit-led discernment; Bratz dolls just don’t seem age-appropriate for young girls. It’s probably the same parental instinct that prompts me to repeat to my daughters, for the hundredth time, to look both ways before crossing the street. It’s perhaps the same impulse that reminds me to look for plastic food and drink containers that are BPA-free, or to request thimerosal-free vaccinations, even though I buy the argument that there’s no link between thimerosal and autism. If it’s my daughters’ physical health we’re talking about, then why take a chance?

And if it’s my daughters’ physical and emotional and spiritual health that we’re talking about, then why take that chance? When coupled with the opinions of most psychologists and therapists, parental common sense wins out. To me, it’s just the better part of wisdom to guard my home against an infestation of Bratz.