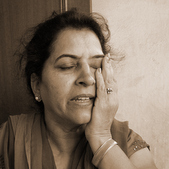 I was that girl you are trying to save. The one who is all rib and screaming and slamming of door, the one who once cuddled in your

lap, who now wants to die. And this is killing you.

And I wish I could hug you now and say, while I was that girl, I’m now a woman who wants desperately to live.

I was 13 and five foot six, 60 pounds, purple with hypothermia and a miracle, the doctors said, but all I could see was the mistake God had made in making me.
And it was four years of not eating. Four years of insulting the mother who homeschooled me, the pastor-father who worked day and night to put bread and granola on the table and it wasn’t enough, I told them.

And I wish I could hug you and tell you that it is enough. You are enough, and one day you’ll laugh with your daughter again. One day you’ll sit across the table from her and share a meal with her, for we serve a God who rocks at redemption.

A God who celebrates the losers, but he often waits and waits until we’re forced to give up and then, only then, does he step in, so just rest, friend. Rest and get your strength back and trust and hope for a new day is dawning.

And I can’t explain why I decided to eat again, except for the way I saw myself clearly one day for the skeleton I was. And I wanted then, more than anything, to be normal. To go to school and to like boys and to write papers and go to slumber parties and to stop counting calories.

It was never about food, and everybody has them. Scapegoats. But eventually, we’re left emptier for the trying.
And in the end, it’s love we’re starving for.

It’s easy to not want our children to feel something for the pain it causes them. But we need to let them cry, and to hold them when they do. And to not fix.

And they’ll know their sadness means something, that they are worth the feeling.

And this girl, the one who’s writing you, she’s now in love with her parents.

So don’t give up. Better things lie ahead. So rest, and trust, and hope.