I Had to Ask for Help

Home » Chasing Freedom » I Had to Ask for Help 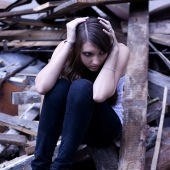 I stood in the kitchen and looked at Rich. “I’m gonna’ be alright,” I said. “I made dinner.” I closed my eyes in exhaustion. Just fixing a meal overwhelmed me; it seemed like a real accomplishment that I had managed it at all.

He glanced at the table and back at me.

That night I sat on my side of the bed and realized something had to be done. “Tomorrow I’m going to make an emergency.” I told Rich. I wasn’t sure exactly what that emergency would look like, but I had already been to my family doctor and had already endured a few useless counseling sessions where I sat guarded and the counselor looked back at me and said things like, “This is interesting” and, “This is complicated.”

Interesting? Complicated? This is my life!

No one was listening. I’d have to get louder.

Rich turned off the light and I was grateful for the peaceful darkness. A few days earlier I had called my OB hoping he would know who could help me. The soonest appointment was next month.

I simply could not wait a month. Physically I was in trouble, emotionally I was sinking, and spiritually I was floundering.

The emergency? I showed up at my OB’s office without an appointment and stood there in the waiting room sobbing. The staff whisked me back to an exam room and Dr. Russel came in. He looked at me. He handed me a tissue. He listened to me spew out in a few sentences what was wrong…He sent me to the ER and offered to personally drive me there.

I spent that weekend in the hospital, a new level of low for me. Hospital time frightened me, but I had asked for help and this was what help looked like, so I took it.  I needed that weekend, but good counseling was still hard to find – I made two tries that ended in dismal failure.

I sat down against our brick house in the very, very corner and made myself tiny.  I called from my small world and my small body to the big God who made me and everything I could see in my back yard. I asked Him to send someone who could help. It felt like a pipe dream, but God heard.

I admitted the truth to Rich. “This eating thing… it’s beyond me.” It was his turn to do something that felt drastic. Tomorrow, he told me, he was calling Remuda.

Remuda gave us a list of people an hour away who were qualified to deal with complicated eating and trauma issues. Rich handed me the list; I dialed the phone. A few days later I met the woman named Most Excellent Helper Sent By God. We had our bumps in the road, but I decided that if at all possible, as far as it depended on me, I was going to make this work. She and I held hands tightly and I began walking out of an eating disorder.

The moral of this story? In order to get help, I had to ask for help. And ask, and ask again. I had to let other people intervene on my behalf and I had to work with the options in front of me.

Why are Anorexics Disinterested in Getting Help? video resource