The Garrison of Comparison 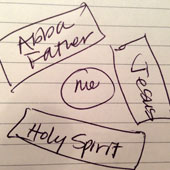 I can’t believe how often I get nicked by “the garrison of comparison.” That’s what I’ve been calling it lately.

A garrison is “a body of troops stationed in a fortified place.”

This definition creates a picture in my mind of the people I compare myself to. I see them standing around me as a “body of troops” and I’m the one who is stuck in the middle, the one who ends up feeling immobilized and trapped “in a fortified place” when I size my life up next to them.

Whether I’m looking at someone else’s successes or opportunities or at their body shape or marital status, it seems to catch me by surprise. Yet once it grabs hold it doesn’t let go very easy.

God says in II Corinthians 10:12 that comparing and measuring ourselves to others isn’t wise. The Message Bible describes it as “moving into someone else’s territory.” But it’s so hard not to do. Is it just me or do you struggle with this too?

Last week I heard an interview by 22-year-old Jennifer Lawrence on “The Today Show.” She was applauded by the interviewer for how she handles “being okay with her body despite the pressures of Hollywood.” I loved her down-to-earth response as she said that the only food she doesn’t like are oysters, adding that paparazzi give up at about 5 p.m. because she “just stays at home and lives a boring life with her parents.” She was so refreshing! Clearly this girl has her head on straight and doesn’t give into the pressures of comparison with other Hollywood starlets on the A-list who could potentially throw her off her game.

I really do want to be free from comparison.

So I decided to take some action recently and created a visual diagram of this in my journal. I drew a circle with the word “me” in the center. Then I wrote the names of people in my life who I compare myself to all around that circle. There in black and white I had to admit the fact that jealousy comes up for me even though I love these friends and celebrate what God is doing in their lives.

I noticed the yucky feelings I had inside as I admitted all this on paper.

But then, by way of contrast, I drew a second picture. As you can see here, I put myself in the center but this time I wrote the names of the Trinity all around me.

Immediately I felt calm inside. It was almost as if I was getting a hug from Abba Father, Jesus and the Spirit!

I realized anew that when I look at my reflection in the mirror of the Trinity, I’m at peace with who I am and where I am.