Home » Articles » The Truth About... » Water and Weight Loss 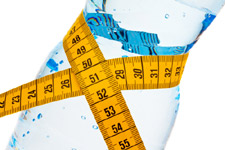 Have you been dutifully carrying water bottles around, trying to sip eight or more cups each day? Are you running to the bathroom every half hour or so as a result? Drinking plenty of water is certainly critical for good health, but many people — with the best of intentions — are overdoing it. On the other hand, there are others who drink very little, keeping themselves in a perpetual state of mild dehydration, in order to weigh less. There is, of course, a healthy place of balance when it comes to drinking water and other fluids. Here’s what we need to know.

Water is essential for survival.

Water accounts for 55-75% of body weight. It gives tissues their structure, helps regulate body temperature, transports essential nutrients, acts as a lubricant, helps rid the body of waste, and aids in respiration. Without a doubt, water plays a vital role in the proper functioning of our bodies!

Each day, we need to replace water losses.

The body loses water through sweat, urination, exhaled air, bowel movements, and, for women with babies, breast-feeding. The amount of water we lose depends on our activity level, the air temperature and humidity, our fluid intake, the foods we eat, medications, hormonal fluctuations, and the health of our kidneys. Since the body can’t store an extra supply of water, we must replace lost fluids on a daily basis.

Drinking plenty of water can keep us healthier.

In addition to keeping our bodily processes running smoothly, it’s important to get enough water in order to help prevent conditions such as constipation, kidney stones and urinary tract infections. Water is also needed in order for certain medications to work effectively. In addition, some research suggests that drinking plenty of water (probably non-chlorinated) may reduce the risk of bladder and colon cancer, possibly by washing carcinogenic substances more quickly out of the body.

Not everyone needs to drink eight glasses of water per day.

Some people need more water than this, while most of us need less. Eight cups a day is a general rule of thumb that has gained popularity, but is not backed up with scientific studies. Let’s apply a little common sense; would a five foot tall woman who’s spent the day sitting in her office on a cold winter day, really need to drink as much water as a six foot tall athlete in Florida? Our basic water requirements vary depending on our body size, and the amount we need changes on a day-to-day basis.

Drinking water isn’t the only source of water.

ALL beverages have a high water content and therefore help to hydrate us. So everything from the milk on your cereal to a cup of soup counts. Although caffeinated drinks have a diuretic effect (increasing urination), they are not as dehydrating as once believed. This means that the body (especially if it’s used to the caffeine) does retain a significant amount of water contained in coffee, tea, etc. The same is true for alcoholic beverages — recommended only in moderate amounts for other health reasons, of course.

Did you also know that about 20% of our water intake comes from solid foods? Fruits and vegetables (think about WATERmelon!) tend to have a high moisture content, but there are many other sources as well. For example, foods such as rice and pasta swell (with water) when they are cooked. Even edibles such as meats and yogurt contain significant water. It makes sense that we find ourselves each day needing varying amounts of fluids, depending on the foods we’ve eaten.

So, our hydration needs can be met though a variety of sources in addition to drinking just plain water.

In general, let thirst be your guide.

Studies show that the vast majority of people are able to stay adequately hydrated by simply drinking when they’re thirsty. This means that in general, we shouldn’t have to force ourselves to drink water (or other beverages), but we do need to take time to listen and respond when our bodies request liquids. If you ignore your body’s thirst, you will experience lightheadedness, fatigue, muscle weakness, headaches and dizziness. Urine output will be greatly reduced as another warning sign.

Note that foods high in sodium make us thirstier; most experts recommend that we eat less salty and processed foods for better health. Also, if you find yourself to be constantly thirsty and urinating frequently, you need to see your health care provider to rule out diabetes.

Be aware that certain conditions make the body more vulnerable to dehydration:

When your body is properly hydrated, your urine will be a pale yellow consistency, as opposed to a dark, amber color. If severe dehydration occurs and is left untreated, there can be serious complications such as seizures, shock, brain damage and even death. It’s important to be aware of those situations that put us at risk, and to seek medical help if we have trouble drinking fluids.

The water and weight loss connection is exaggerated.

Water is certainly a healthy, inexpensive, no-calorie beverage, but there are a lot of misconceptions about its role in promoting weight reduction. For instance, it’s a myth that drinking lots of water prevents calories from being absorbed. Also, it doesn’t appear that drinking higher volumes of water curbs the appetite, but it is true that high water foods such as fruits and vegetables are more filling. Finally, although water is needed as part of the process of burning fat, drinking extra amounts won’t accelerate or increase the process.

In rare instances, drinking a lot of water can be harmful.

For most people, there are no physical complications associated with drinking a lot of water. But it is possible to push the limits of our bodies if we force in too many fluids. The kidneys can become overwhelmed and have trouble getting rid of the extra water, which can lead to serious and dangerous swelling of the brain. The symptoms of water excess are: confusion, muscle cramps, fatigue, nausea, vomiting, headaches, seizures and even coma. Another name for this condition is “hyponatremia,” meaning that the sodium content of the blood is too low because it has been diluted by excess water, and body cells have become water-logged.

A person is more susceptible to hyponatremia if they drink excessive amounts of water in the following situations:

Overall, dehydration is far more common than water excess, especially during prolonged exercise. The vast majority of us will never experience hyponatremia, even if we have been drinking a lot of water, but we should be aware that it is a risk.

If you are not enjoying all the water you are drinking and are tired of frequent restroom stops, you can healthfully cut back on some of those water cooler trips. Unless you have a medical condition that compromises your system, you can rest assured that your body’s thirst mechanism will guide you in getting adequate fluids, from a variety of sources in addition to water.