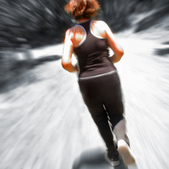 “I think you should give up running,” Laurie said. A perfect representative of the hippie, Washington state culture, she always posited things as wise suggestions, never demands. The fact that I’d hired her to be my dietitian gave her the authority to tell me what to do, but no practical tools to make me to do it.

“I know you’re right, but…,” I dangled the conjunction, leaving Laurie to decide whether I truly agreed with her, or was merely placating her with what I knew she wanted to hear. By this time, half my life had been warped by anorexia, I was a practiced liar when it came to all things food and exercise.

I’d scheduled this appointment before we ever even moved to Washington. My fragile recovery, post inpatient treatment, had been mauled by poor choices during my husband’s and my time in Georgia. The most detrimental decision, to join the running club. Now, family and friends were threatening to send me to inpatient treatment, again.

It started small, a moderate run with some new friends. But I knew my weakness, I knew my latent addiction to the sense of control that extreme exercise gave me. That coupled with my pride, when new friends praised my speed and endurance, enticed me to the precipice of a slippery slope. And down I went.

Pretty soon I was running a minimum of 50 miles per week. My compulsive tendencies went into overdrive. It scared me. Once I ran 10 miles, I could never allow myself to run less. Once I’d done a marathon, I felt like a wimp to only run a half. After I won a race, I lived in stark terror of “failing” the next one.

It felt good to call myself a runner. It gave me a sense of purpose, identity. I knew that my exercise had gotten out of control, but somehow, even after two inpatient treatment stints for anorexia, I refused to admit that my running success was leading my heart, bones and liver to failure. Additionally, my skewed relationship with running was weakening my relationships with everyone else in my life, especially my husband.

Patrick deployed as a company commander. By default, I was expected to become the rally man for the spouses of all his soldiers. So, we put our marital issues on hold. It seemed like we had bigger jobs to do. God was working on a bigger problem in my life.

It’s not that our marriage was insignificant, only that it’s problems were merely symptoms of an issue I didn’t want to address.

Now, sitting in Laurie’s office was as much an attempt to rescue my marriage as a repeat attempt to get my health back under control.