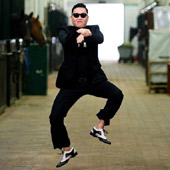 SCENE ONE. A typical family living room. Maybe yours…

MOM: (walks in, sees TV, says to DAUGHTER) “Sweetie, what language is he speaking?”

MOM: “I was close! Hey, can I quickly check to see if we recorded Ellen?”

DAUGHTER: “Oh, all right.” (clicks over to recording of Ellen)

DAUGHTER: (exasperated) “Mom, don’t you know anything about anything? Here.” (hands MOM remote and leaves room)

MOM: (to herself) “Oh, I recorded The Today Show, too.” (clicks over to Today)

MOM: (calls out to DAUGHTER) “Sweetie, this Korean guy is everywhere!”

DAUGHTER: (yells back) “Mom! You don’t know anything about anything in the whole wide world!”

What’s going on here? More aptly, what in the whole wide world is going on here? “Gangnam Style” has become a bonafide hit worldwide, quickly surpassing songs by Justin Bieber and Katy Perry, and garnering over 410 million YouTube views. It’s all over TV and radio; it’s everywhere! And while part of me is pleased an Asian song has reached such heights, I write this post not as a celebration, but as a warning.

“Gangnam Style” and its video are not essentially different from typical MTV fare; they have both funny and raunchy elements. But they will serve as a first point of entry for many Americans into the increasingly popular Korean Pop (or “K-Pop”) universe of “girl groups” and “boy bands.” Prolonged exposure to these groups will have a negative impact on many American girls and women with respect to body image.

As a dad to two girls, I’m most concerned with the girl groups. Almost every group’s videos show members in sexualized poses, often accentuated by short skirts and stilettos. Repeated viewing of such images can be harmful, say a clear majority of psychologists. And while many American female singers are similarly portrayed, K-Pop girl groups go further, showing off their particularly thin bodies. With usually four to nine women per group, thinness is a major visual feature. Add to this the news that some girl groups eat ridiculously little, and the fact that many group members undergo plastic surgery, and I’ve got a problem with K-Pop!

It’s often stated that Korean women are generally smaller than other women. Therefore, because Koreans are “used to” seeing especially thin women, K-Pop groups have supposedly little negative impact on Korean sensibilities. Well, I seriously doubt that. But such logic bolsters my point. Perhaps because American girls and women are less accustomed to the thinness more prevalent in Korean society, they are more susceptible to K-Pop’s potential danger.

Parents, let us be aware. There may be some funny aspects to “Gangnam Style,” but K-Pop has some elements that we must take seriously.